Édition 2019 : Disruption, massive destruction and organization of an 'internation' in the sense of Marcel Mauss 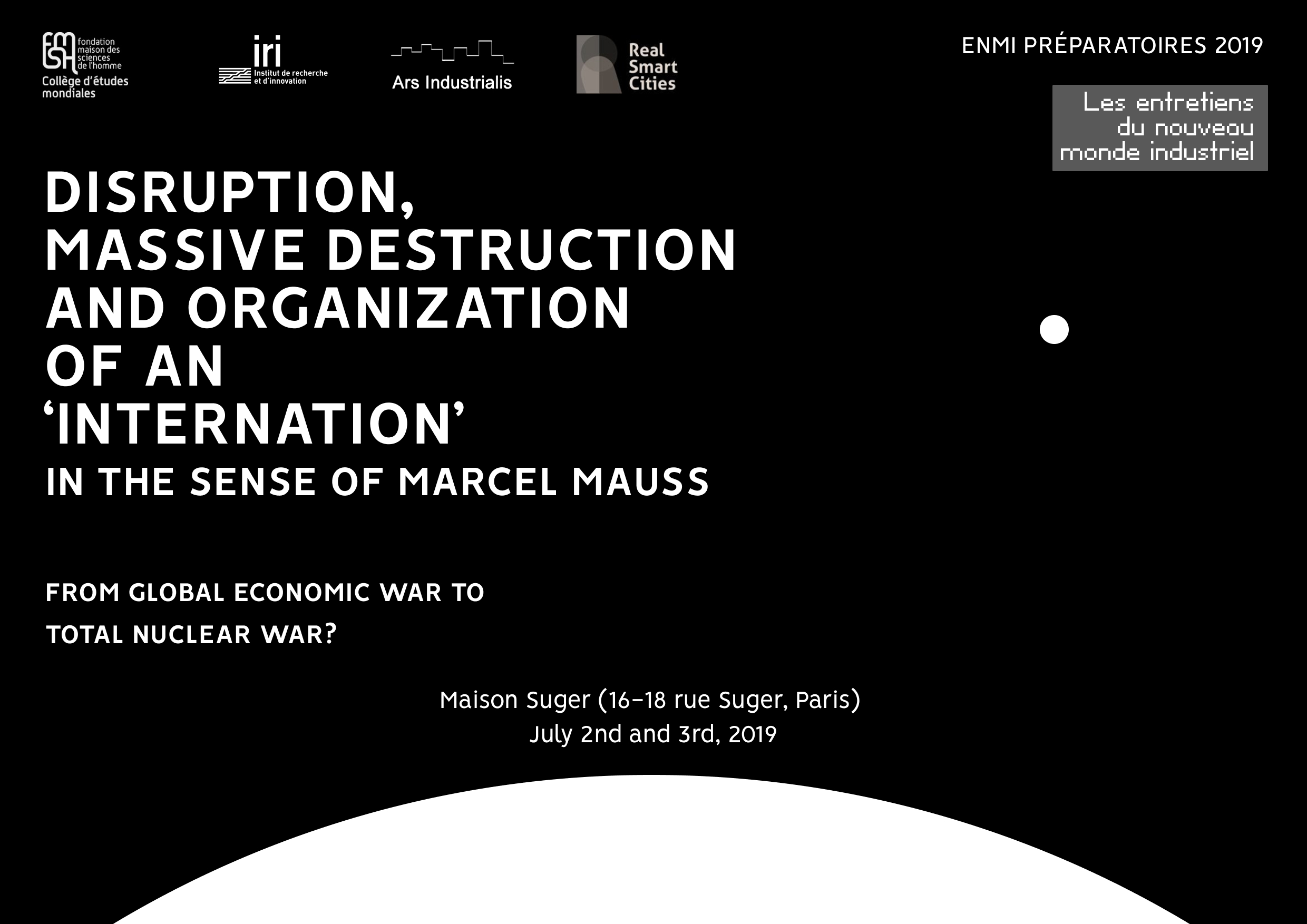 The ENMI Préparatoire 2019 are devoted to the question of the locality in the Anthropocene era, in its current state and beyond:

• in its current state means: facing disruption as a weapon of mass destruction, • beyond means: in view of the constitution of an international based on economic peace and from a critique of the concept outlined by Marcel Mauss.

This initiative comes close to 50 years after Dennis and Donell's Meadows report, best known by the title The Limits to Growth, 50 years after the proposals in Arnold Toynbee's The Human Adventure, less known, and 50 years after The entropy law and the economic process by Nicholas Georgescu-Rœgen, very little known, if not completely unknown – three texts published in 1971 which are at the same time major works of science, history and economics (at least for Toynbee and Georgescu-Rœgen), and leading historical documents to understand how the twentieth century gave bir- th to the twenty-first century "for the better and for the worse, and by repressing these works, whose lucidity and ignorance (for last two texts) appear confusing afterwards".

On 10 January 2020, a memorandum of understanding will be officially transmitted to the United Nations at the Palace of Nations in Geneva, the site of the LoN. This message to the United Nations will be sent to them almost 75 years after the foun- ding of the United Nations itself – at the end of the Second World War, to replace the League of Nations, itself a result of the First World War and the Paris agree- ments of 1919 – that is to say also of the Treaty of Versailles, which we know had apocalyptic consequences in Europe, and how it contributed to the birth of a new horror, unprecedented, and a new terror, unprecedented too – worse than any that was known before.

The current world economic war, initiated from the slogan "there is no alternative", postulating that the problem was the public power (the government, in the sense of Ronald Reagan), which has also been systematized after the collapse of the the USSR, has caused different kinds of destruction that are much more considerable and irreversible than those generated by the first two world wars combined. If a new economic peace is not negotiated, through a new Convention, this current – economic – third world war, because of the unsustainable destruction that it provokes, due to the unavoidable scarcity of the resources of subsistence such water as well as basic raw materials of the current economy, will inevitably lead to a third world war – and this will be inevitably nuclear, if nothing is done to reverse in the next ten years this globally suicidal logic.